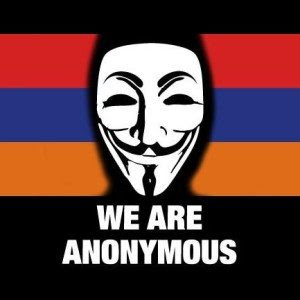 “…And to the Turkish government: In 1915, The Turkish killed millions of Armenians. Now you have to pay for your actions. Nearly two million people were killed by the Turkish including children and women and yet you still deny the existence of the genocide… This is a warning to you. We will start targeting Turkish government websites until the genocide is confirmed,” read the altered voice on the YouTube clip uploaded on Jan. 25.

The message also threatened to engage in cyber-attacks against official U.S. websites if the genocide is not recognized by “next year.” It is unclear whether the deadline is April 2012 or April 2013.

“Every four years in the United States, every official who wants to be a president tells the Armenian people that they will confirm the existence of the Armenian Genocide. However, the U.S. has not yet confirmed it. If this occurs next year, we will start targeting U.S. official websites. Operation Armenian Genocide, engaged,” continued the voice.

It appears the video was prepared before Jan. 23, when the French Senate passed a bill criminalizing the denial of the Armenian Genocide. “Your protest against France won’t help. The French Senators will pass the bill and they are supported by hundreds of historians,” declared the voice in the clip, adding, “You will not join the European Union and never will.”

The video announced both the launch of Operation Armenian Genocide and Operation Anti-ACTA (the acronym for the Anti-Counterfeiting Trade Agreement, which deals with intellectual property rights and includes measures against the production and distribution of counterfeit products, generic medicine, and online piracy). Opponents argue the agreement infringes on individual rights, including free speech and the right to privacy, and would lead to an increase in border searches and screenings of person electronic devices such as laptops and iPhones. An earlier draft of the agreement said internet providers would give authorities information on individuals suspected of copyright infringement without a warrant, and that governments could shut down websites engaged in piracy.

According to a thread on a Russian-language blog post, Operation Armenian Genocide (#OpArmGenocide, as it is also called on sites such as Twitter) was “shelved” to focus on Operation ACTA and Operation Megaupload, and it is unclear when it will re-launch.

On Jan. 27, however, the official website of the Turkish Ministry of Foreign Affairs was briefly offline. The Armenian Weekly could not independently verify that it was due to Anonymous action, although some sources claimed it was.

The creator of the video may be of Armenian origin, since s/he states, “Germany is still paying Jewish people for their actions and now it’s time for Turkey to give back our land and pay us for our loss.”

Anonymous has no leader, but is made up of internet users who work collectively towards a certain goal while maintaining anonymity. Anyone can become a member of Anonymous and propose actions; it is up to each member to support or oppose any suggested operation.

In 2011, Anonymous went after Turkish government websites in retaliation for measures preventing Turkish citizens from accessing websites such as YouTube. Turkish authorities had initially set up the ban because of the presence of videos offensive to Mustafa Kemal Ataturk’s memory.

In a previous operation, Anonymous attacked websites belonging to the U.S. Department of Justice, the Federal Bureau of Investigation, and the Universal Music Group, among others, in protest of the shutdown of the movie-sharing website Megaupload in January, and the arrest of four of its staff.

During the Arab Spring uprisings, Anonymous targeted Tunisian, Egyptian, and Libyan government websites in solidarity with the protesters. The group has a string of operations under its belt, including Operation Intifada, in response to Israel’s alleged involvement in cyber-attacks against Iran; Operation Syria, in support of the 2011 Syrian uprising; Operation India, against corruption in the country; Operation Blackout, in retaliation of the Stop Online Piracy Act in the U.S.; and Operation Avenge Assange (part of Operation Payback), in response to companies terminating their services to WikiLeaks.

Anonymous hackers have also released e-mails, passwords, and private information of individual targets, including police officers who were believed to have used force against protesters in the Occupy movement.