AS THEY woke up! Control and monitor everyone and everything!

AS THEY woke up! Control and monitor everyone and everything! 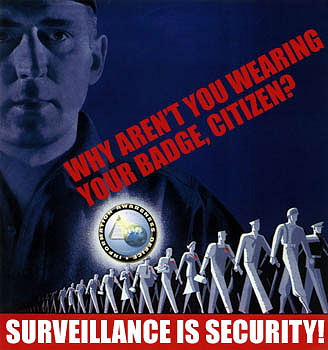 'Tip of the iceberg "program MODCHIP students in Texas

As mentioned in a very recent article in pentapostagma. Gr school district in the San Antonio, USA, Project Tracking Student ( Student Locator Project (SLP)) is now mandatory and is in the final stages of implementation (test environment in beta) Jay High School in High School and Jones.

The Student Tracking Program includes the use of radio frequency identification technology (RFID) and expressed in formal objective: "to make schools safer, knowing that students are and roam the school grounds to increase revenues and provide a smart card authentication ( SS pentapostagma. gr ultimate mark that ...)

But let's not think that this smart identity used only school district in San Antonio, Texas.

In order to examine the books of school libraries, to make the records in school lessons and paid meals' smart identity "( "Smart" ID card) is used for controlling and monitoring the students and their movements in the school grounds across America ...

The argument or arguments used rather for the use of RFID technology is the safety on school sites, effective and fast recording and the proper functioning of feeding programs and libraries ...

In Austin, the Texas, the combined use of technology GPS (Global Positioning System) and RFID used to prevent students from lessons to avoid .. In fact, those students who have a poor track record at the school where courses are targeted to be under surveillance and monitoring ..

It has been estimated that about 1,700 students have been included in those "programs" and the most shocking is that this has been done with parental consent and acceptance ...

Specific students are placed under the supervision of "mentors" who oversee the actions of students and where students are required to make weekly report!

Beyond the most obvious abuse of freedom every student in one sensitive teens, we can conclude that these practices are similar to regular police officer suspensions, thus addressing the "infringing" students as potential criminals ...

Those who deviate from the targeted system. What generally happens to us all. Already our movements are controlled through several different methods :

Unfortunately we have new "developments" ...

Neurologists at the University of Berkeley in California used a technique that managed to watch the brain activity of people as they heard the words uttered these individuals.

So, IBM is working to create detection technology of the mind and thoughts as a reader and as a bar - code which can be read in our DNA ...

RFID chips used in mobile phones have the ability to detect a user's location with a sensitivity of only a few centimeters from the location (provided by GPS) through a new technology used in so-called "smart" phones   (Smartphones). The Apple, Google and Microsoft monitor their customers for years, filing and storing personal data and making digital collaboration (mainly On USA) by the police and the Ministry of Security of the Country.

The CIA has the ability to   bypasses remote   and gain access to every email, every phone call in, email the private conversation that takes place in the private space of the house people!

Maybe in some, the U.S. and London seem "distant" examples, but the New World Order is everywhere 'function' ...

It is important to have knowledge of practices to respond to the (very likely) and implementation efforts in Greece (the first example of the citizen card, card receipts, etc.) ..
Posted by ICEUJIN at 1:05 pm No comments:

Links to this post
Posted by @LegionNET LGNSEC INC Unknown